Whilst I was in Helsinki airport last week, I read this “honest in-flight announcement” from the Economist — a must-read for any frequent traveller.

I’ve also read several obituaries for Steve Irwin, which is momentous in itself because I’ve never actually read an obituary before. The BBC has some pics of the memorial service and possibly one of the most iconic photos I’ve seen in a while (just look at the expression on that Koala!) 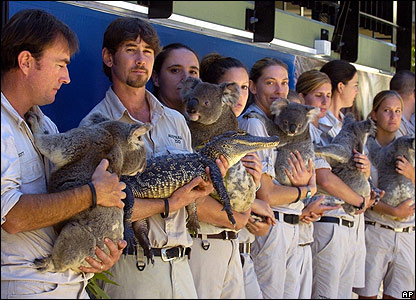 On the subject of sad things, this interview with the mother of a young doctor who was killed in a car crash is particularly heart wrenching. I hope never to be in that situation. There’s much talk today about the safety of some young drivers and how they act recklessly without comprehending that their vehicle can kill people. Messing around with either cars or guns is guaranteed to make me mad, because both have the ability to kill and maim but somehow people forget this. It’s just one of those little moral laws I carry around in my head: never mess with cars or guns.