Firstly, I should mention that I wasn’t trying to push dualpricing.ie too hard. It’s just a side project and, frankly, thousands of visitors is probably going to cause me problems that I don’t want to spend money or time fixing. However, I was quietly hoping that the site would be useful and interesting to someone. In terms of a commercial website, I haven’t achieved any sort of decent visitor numbers but for a non-Mulley, I think I’ve done pretty well. At the time of writing (a little over a month since launch), I’ve had over 2000 unique visitors and the site ranks #1 for ‘dual pricing ireland’ in Google.

I did only two proactive marketing activities: I twittered and I blogged about it. And nothing happened. Of course, I did this on Christmas Eve (hint: not the best time to start your marketing “campaign”) and I literally got 12 visitors. Over the next week I picked up ~1 vistor a day. On 30th December, someone posted a link in a politics.ie discussion (thanks Danny!) and I got 23 visitors. Then it was back to 1-10 vistors a day until 12th January when I twittered about dualpricing.ie in relation to an Irish Times article. In the meantime, Diarmuid MacShane of ValueIreland.com had picked up on dualpricing.ie because I’d linked to his blog from the about page. He asked me to write a guest post about dualpricing.ie and this was published on 13th January. I received 9 visitors referred from that blog on the 13th, but 110 overall since then. At the same time, Conor Pope of the Irish Times wrote about dualpricing.ie on their PriceWatch blog — this has gathered me 263 visitors since 15th January. On the 16th January, there was a little Twitter activity as people started tweeting about the site and Damian Mulley picked up on it (thanks!).

Since then, I’ve been consistently getting 50-100 uniques per day, with occasional spikes in the 150 range (mostly I suspect coming from twitter or perhaps email — it’s a shame that web analytics don’t extend to Twitter clients.

One other interesting aspect has been my contact with journalists: I’ve been contacted by an Irish Independent journalist but the subsequent article hasn’t appeared (update below); a Roscommon radio station wanted to interview me but I’ve never heard from them again; 96fm in Cork still wants to interview me but I’ve now spent 3 mornings waiting for them to call me back. It’s frustrating but not half as bad as if I really cared about promoting this site. I can’t imagine how hard it is when you really want to push a product or issue and are met by this sort of apathy. And this interest by journalists is no doubt helped by the subject of the site which is of current nation interest — God help you if you’re trying to push something that is not already on their radar.

Update: It seems I spoke too soon, as John Cradden published a story about dual pricing in today’s Independent newspaper. Hmmm… let’s see what that does to the stats! I’ve also had another radio station contact me. Perhaps soon you’ll hear my boring voice broadcast over the air! 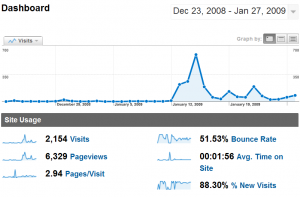