PhotoSmith v2 - an essential Lightroom companion app for your iPad 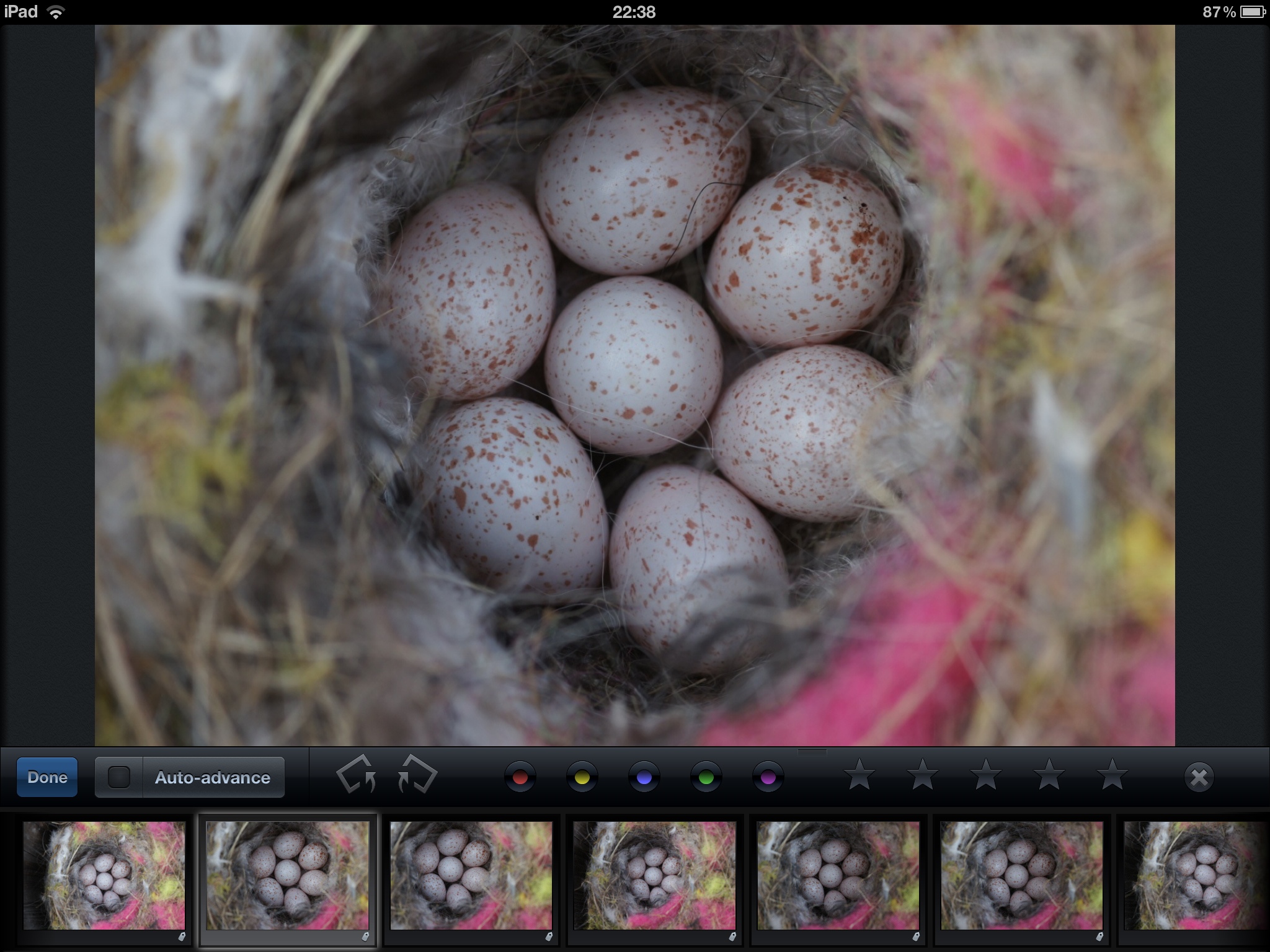 I won’t lie. One of the reasons for buying a new iPad was so that when we’re away in Kerry I could backup the images, show them off to family and hopefully get a head start on editing them. I’d hoped PhotoSmith would be the answer but version 1 left me a bit cold: yes, syncing the images with Lightroom worked fine and I could rate and tag photos, but it was a horribly slow process. For example, there was no batch tagging so each photo needed to be tagged individually. Urgh. Not fun.

So, I was pretty impatient waiting for PhotoSmith v2 to be released. Finally it was released last week after the last of the major bugs were squashedâ€¦ and I’m really rather impressed. It’s the closest thing to having the Lightroom ‘Library’ module on your iPad (i.e., it’s for organising your images. It is not a RAW processor).

You import your images to the iPad Photo Library using the camera connection kit as usual. Then you fire up PhotoSmith and it’ll import them into its library (yes, the actual RAW files — there’s no automatic conversion to JPEG or anything nasty). The images themselves appear quite quickly but you’ll also have to wait for the full metadata to import. You can choose to keep the files on your memory card if you don’t trust the iPad as the sole storage for your images (probably a good idea).

As you can see, this is pretty similar to Lightroom’s Grid view: 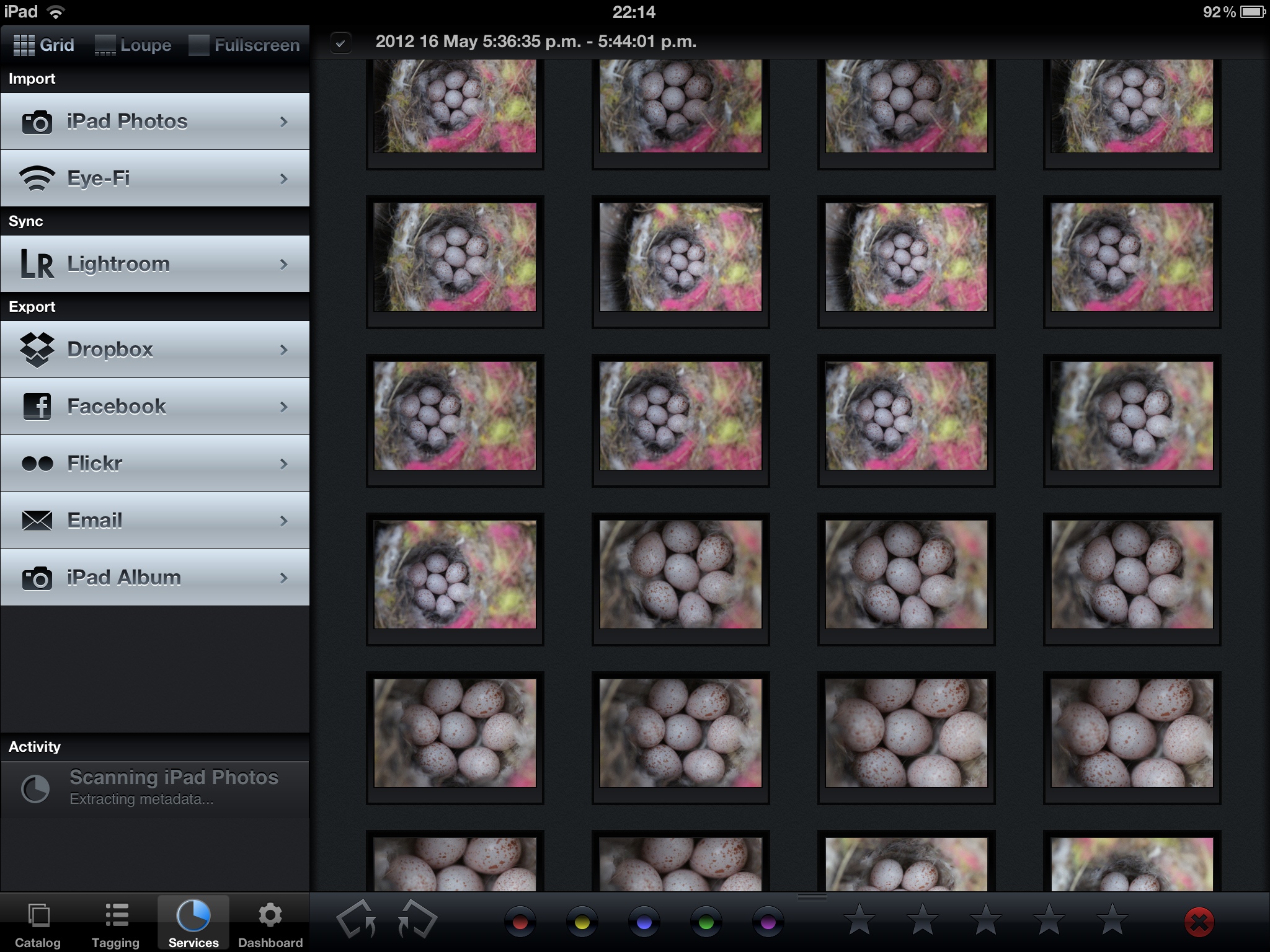 PhotoSmith will automatically batch together photos taken at the same time (like iPhoto?). At first I didn’t particularly like this feature but you can control the granularity of the grouping using the slider in the filter bar (see next screenshot). It actually makes selecting and scrolling through images in the grid view much easier, which is probably worth the inefficient use of screen space.

The tagging interface is considerably improved and works in a similar way to Lightroom, but optimised for the iPad touchscreen interface. You can batch tag multiple photos at a time and it’ll import your entire Lightroom keyword hierarchy. The keyword search makes it easy to find the tag and the recent/popular panels keep the important keywords handy. 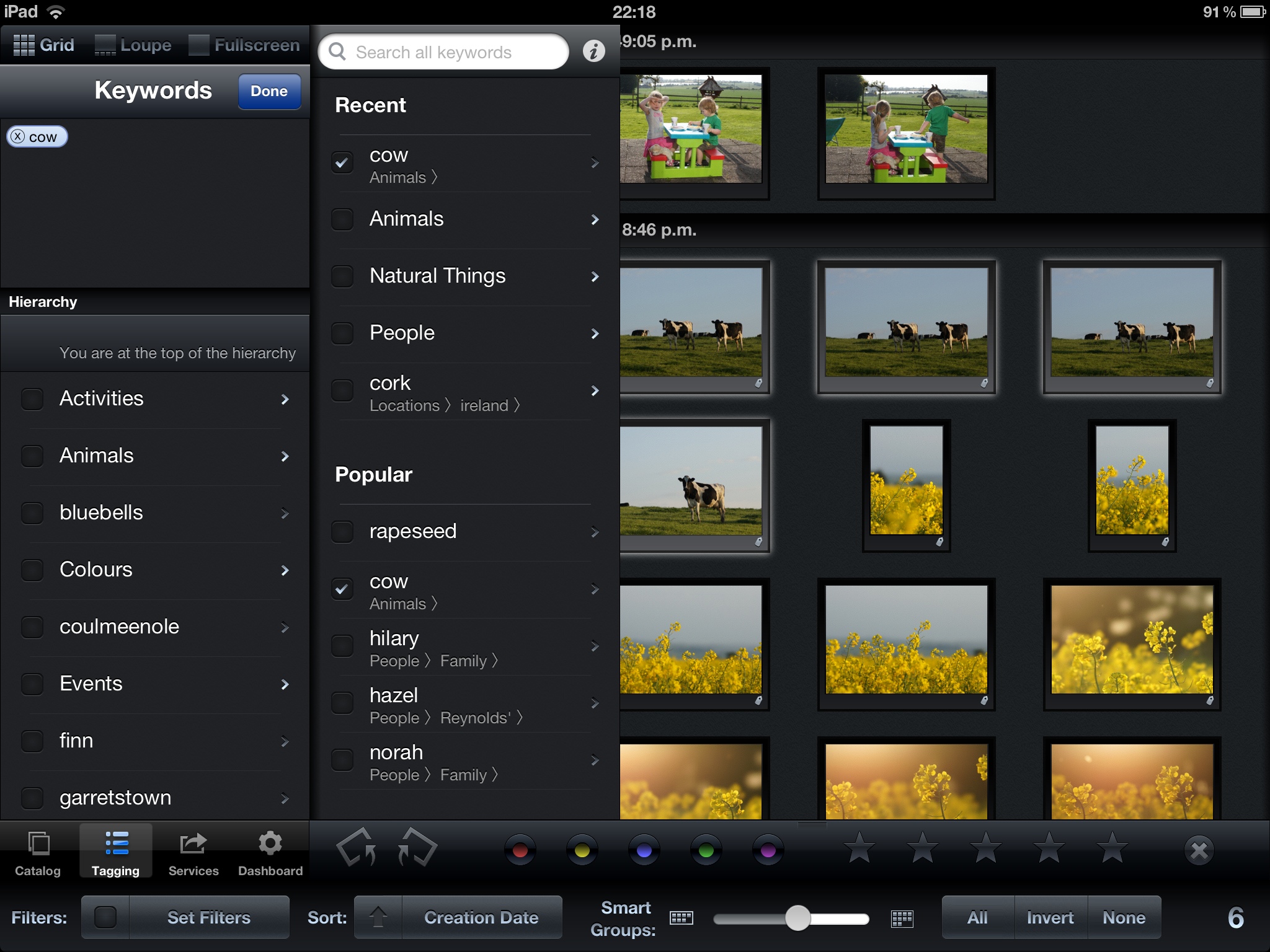 Also, there’s a (hide-able) filter bar at the bottom of the screen. This lets you filter the images in a similar way to Lightroom and lets you select all images, none, etc. 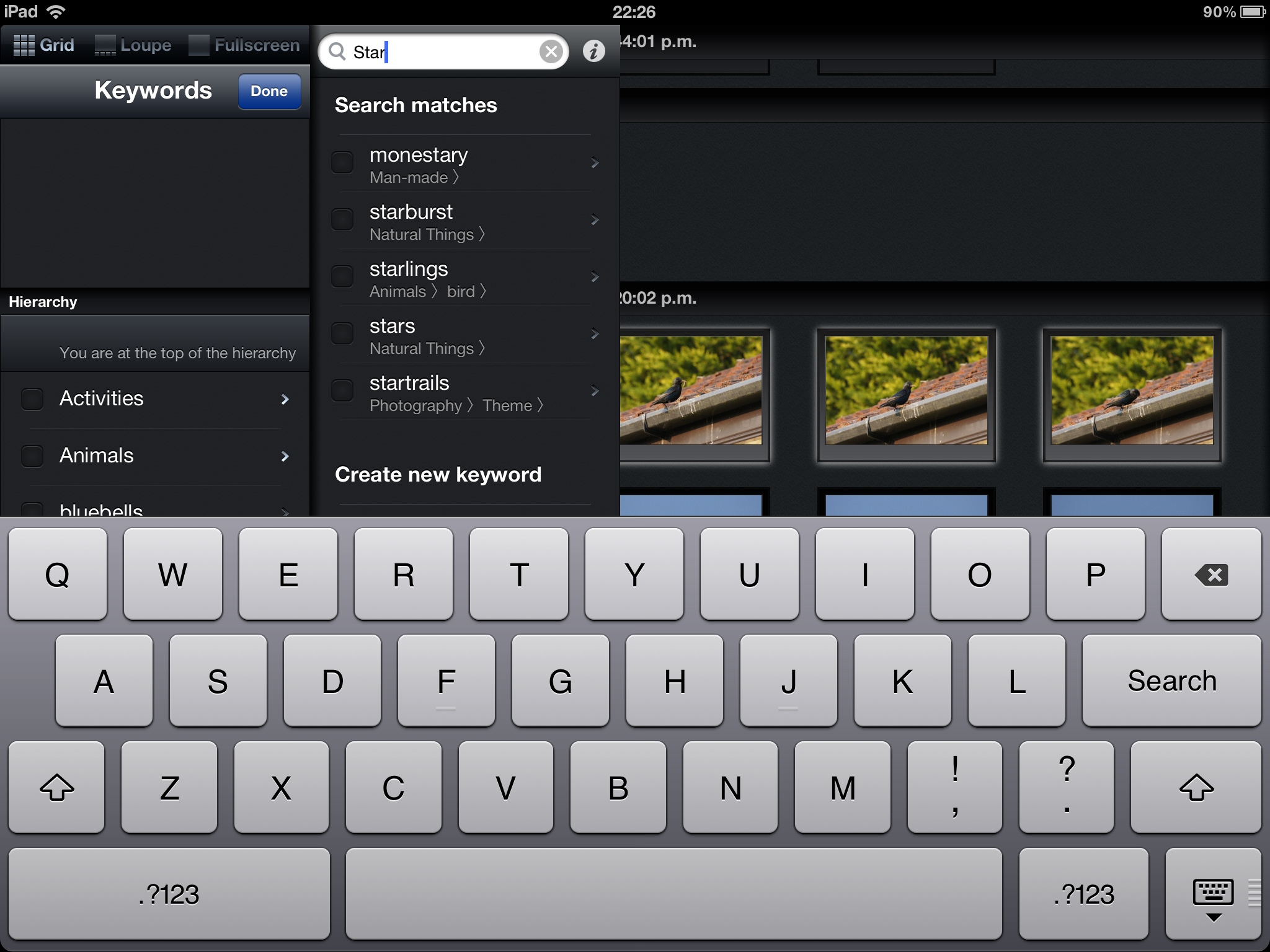 The loupe view does pretty much what you’d expect: you can swipe through the images, use the film strip, pinch-to-zoom, rate it with stars or assign a colour. You can also mark the image as rejected so it will be removed from the collection (you can see them in the ‘Rejected images’ folder) and they won’t be sync’d to Lightroom (and if they’re already in Lightroom, the copy name will be changed to ‘Rejected’ — I think). One defect in the current version is that marking an image as rejected removes it from the film strip but doesn’t change the main image to reflect the current selection. I’m sure that’ll be fixed soon though.

One other limitation is that you can’t quite zoom in far enough to check critical sharpness. Sharpness isn’t the most important factor in a photograph but I shoot with manual-focus lenses quite often and I’ll shoot several frame to ensure I get one spot on. I’m not quite sure what the zoom limitation is caused by but it seems to vary by camera (I was using 18MP Sony a580 RAW files) so perhaps others won’t have this issue. Still, it’s good enough to spot the big misses.

The synchronisation process has really improved too, once you’ve configured the associated Lightroom plugin. Now you can initiate the sync from within PhotoSmith once you’re on the same wifi network as your Lightroom computer. There’s also a new publish service for your iPad, which allows you to send photos back to PhotoSmith from Lightroom and treat it just like any other publish service like Flickr or Smugmug. It will be useful for anyone wanting to maintain a portable selection of processed images for a portfolio.

If you kept the images on the memory cards you could import these as usual into Lightroom, and then sync PhotoSmith which should just apply the metadata (keywords, ratings etc) to the files already in Lightroom. 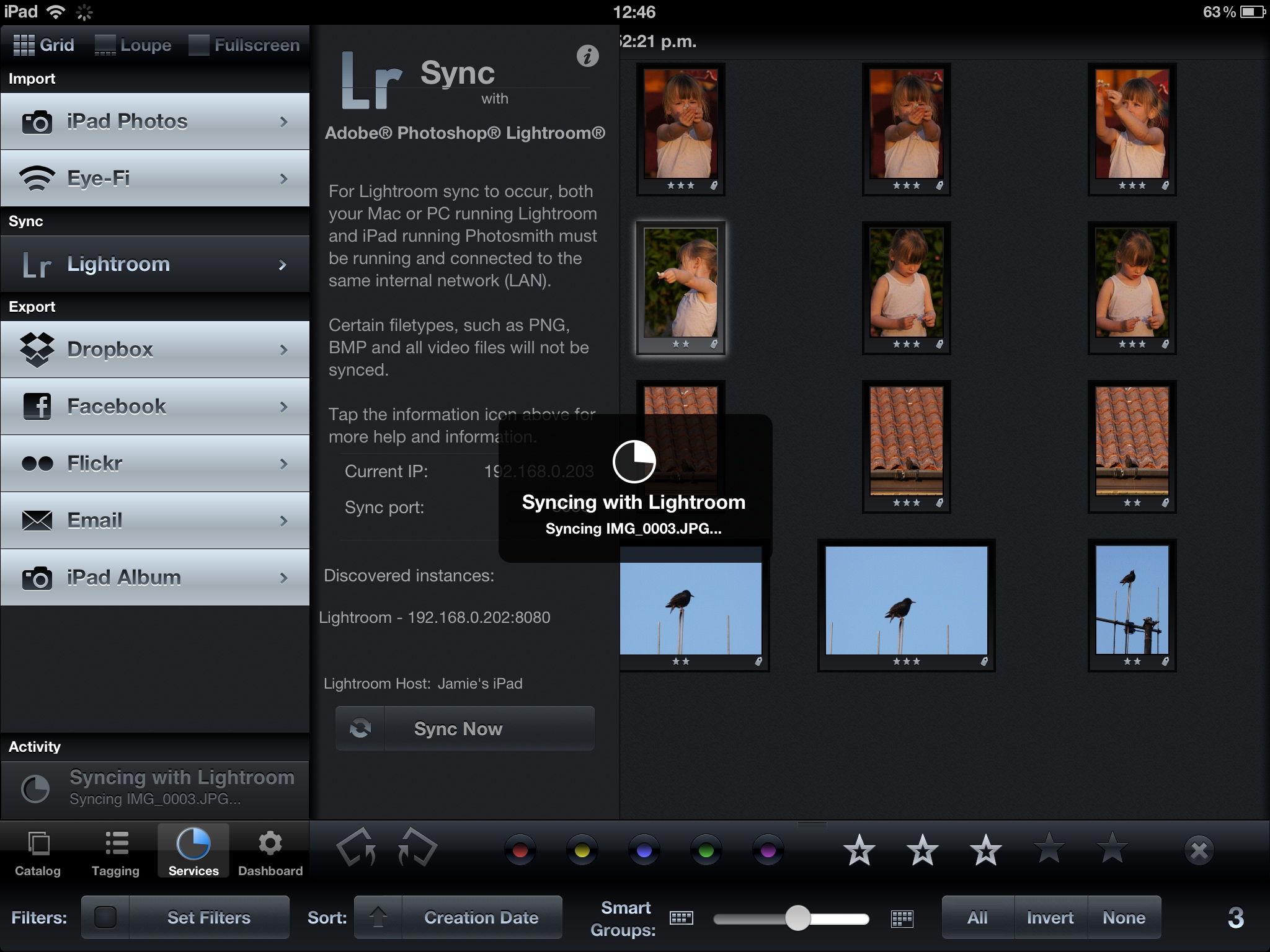 PhotoSmith v2 is a huge update from the original version. It’s not a cheap app (by app store standards) but if you’re an iPad-owning photographer then you are doing yourself a disservice if you don’t buy it. It allows me to review, select, rate and keyword all my images in the evenings, which makes the post-holiday photo processing considerably less arduous. Now, because all the images are already rated, I just have to double-check critical sharpness and do whatever processing is required on the top images.

The new import plugin also lets you apply your existing metadata presets (e.g. for copyright information) but unfortunately it can’t automate the conversion to DNG files (it’s a current restriction of plugins but hopefully Adobe will fix it). It’s not too hard to setup a smart collection to search for unconverted RAW files and just batch convert them whenever you remember.

I noticed a few crashes but it’s still early days for this rewritten software and, in general, the performance was adequate. That’s pretty impressive considering we’re dealing with a few hundred RAW files on a tablet computer which people (myself included) mocked as a pointless media-consumption device when it first launched.