My Favourite iPad Apps for Producers 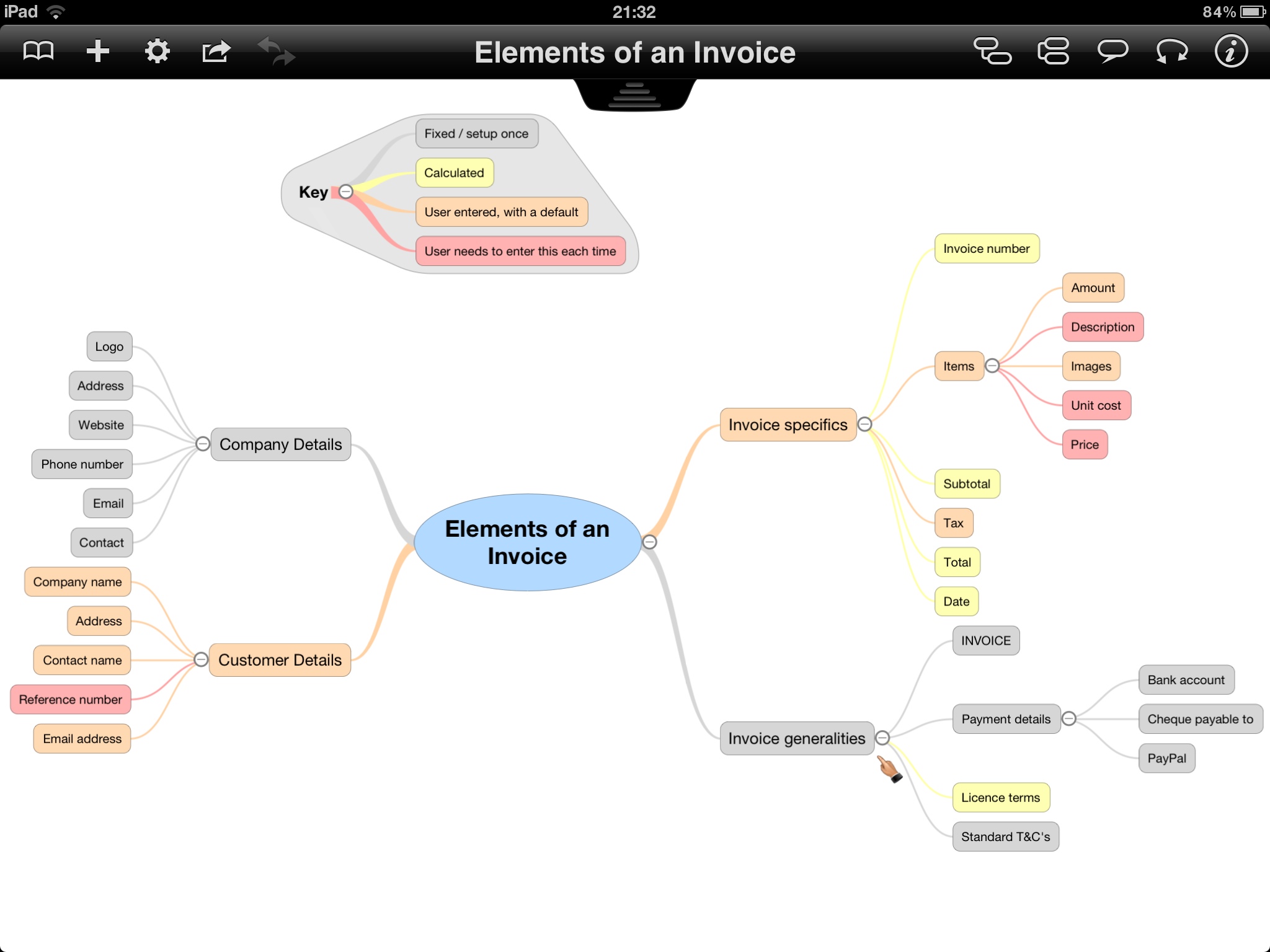 A criticism levelled at the iPad is that it’s just for browsing the web, watching movies and playing games. Since I have such a crap broadband connection, I don’t watch movies and downloading massive games is out the window too. After some experimentation, I’ve found a few really good apps for actually doing some productive work

Blogsy is a nice blog editor which features a rich text editor, in-app browser and image uploader and just generally does its job quite well. I particularly like that you can write draft posts and come back to them later, and you can do this offline. 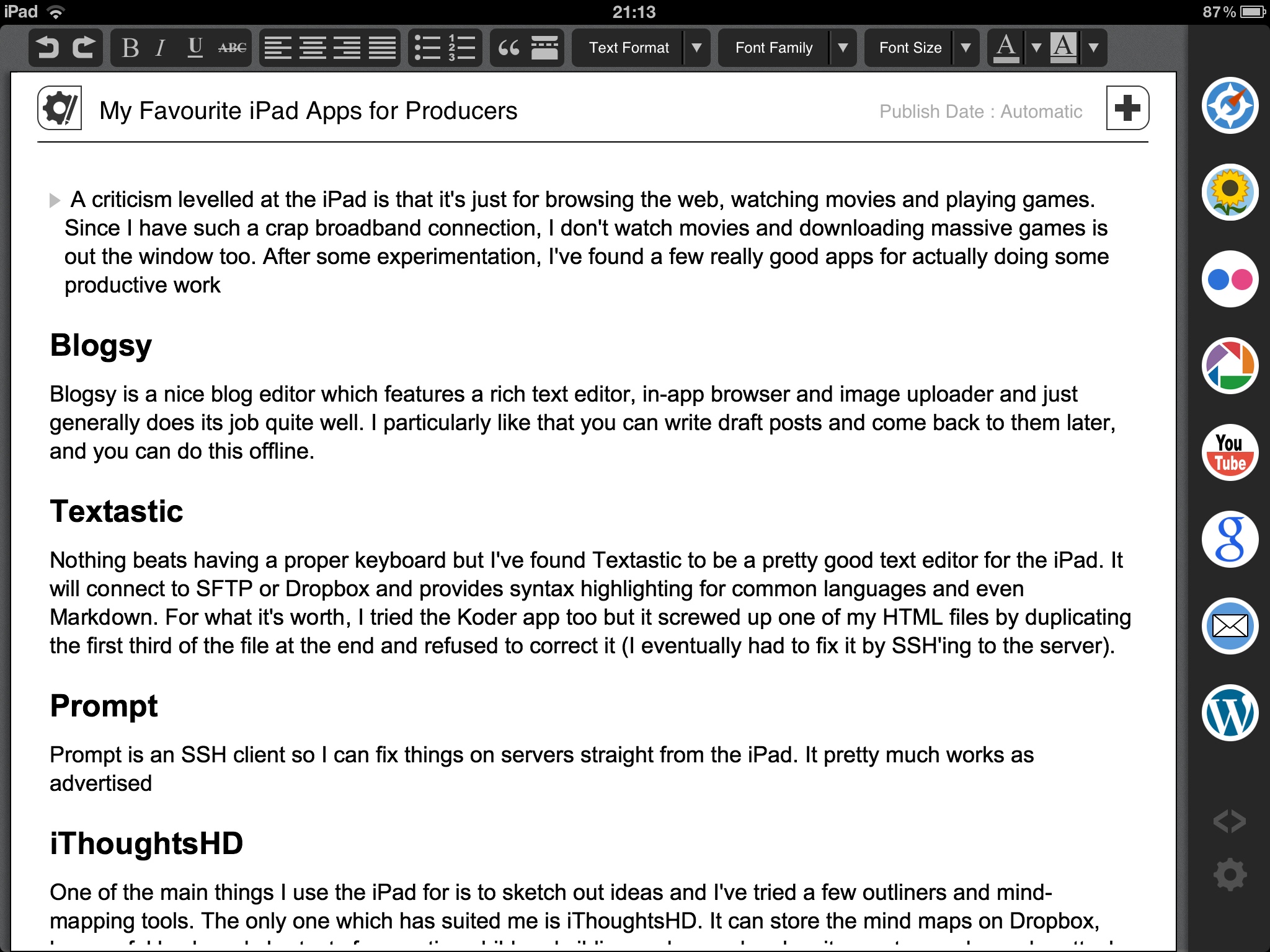 Nothing beats having a proper keyboard but I’ve found Textastic to be a pretty good text editor for the iPad. It will connect to SFTP or Dropbox and provides syntax highlighting for common languages and even Markdown. For what it’s worth, I tried the Koder app too but it screwed up one of my HTML files by duplicating the first third of the file at the end and refused to correct it (I eventually had to fix it by SSH'ing to the server). 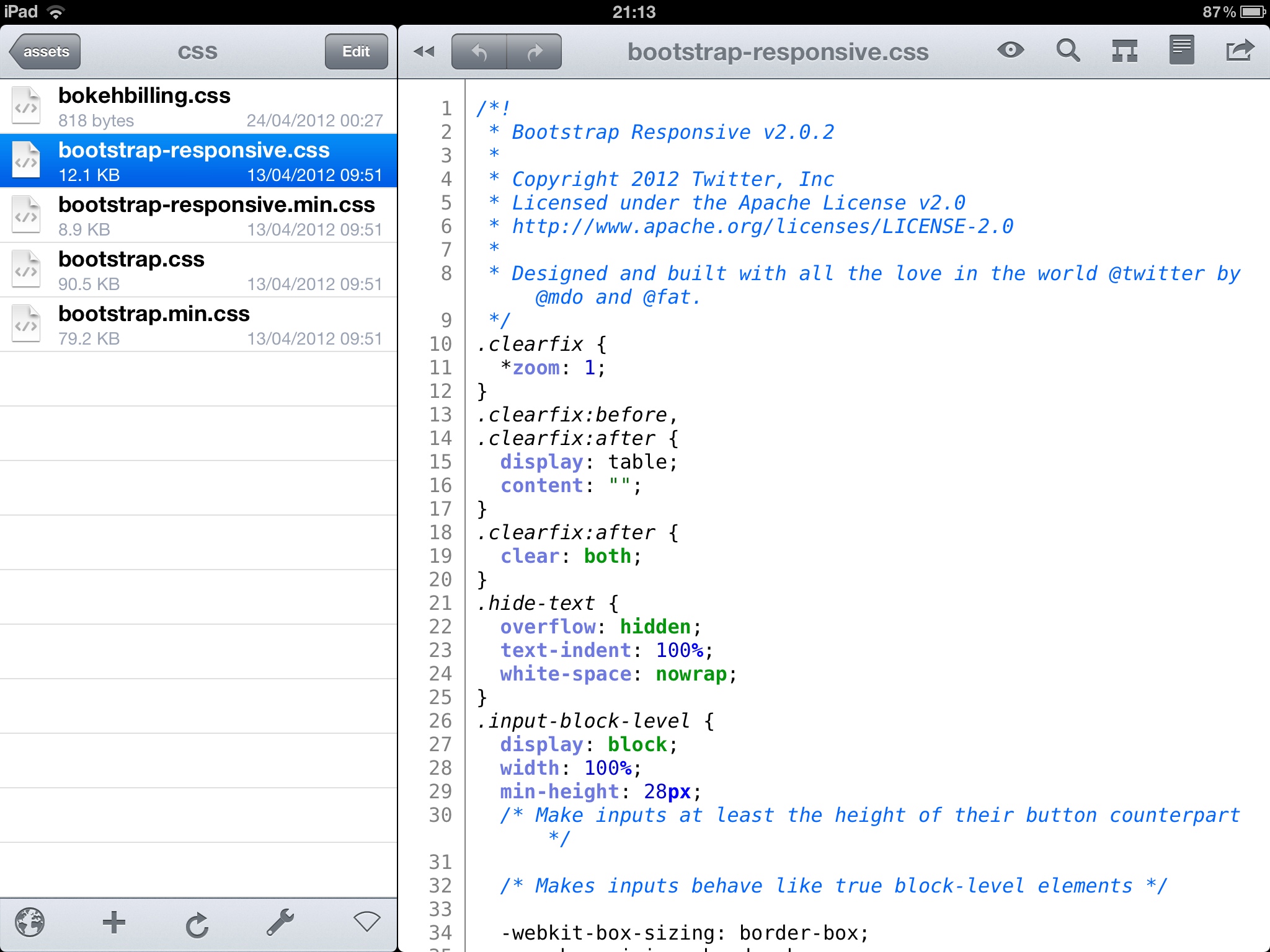 Prompt is an SSH client so I can fix things on servers straight from the iPad. It pretty much works as advertised and has a few extra keys which are useful in the shell 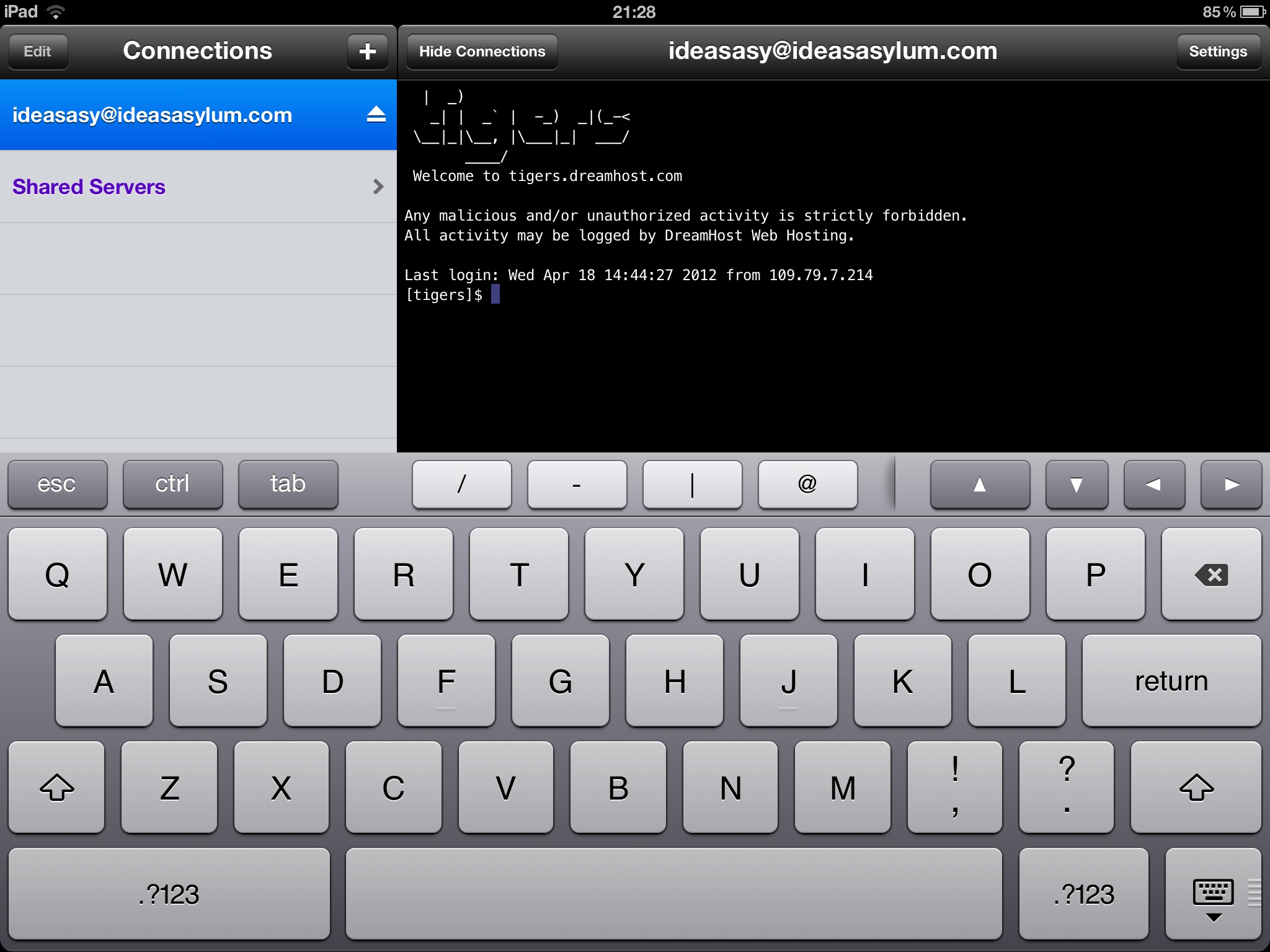 One of the main things I use the iPad for is to sketch out ideas and so I’ve tried a few outliners and mind-mapping tools but the only one which has suited me is iThoughtsHD. It can store the mind maps on Dropbox, has useful keyboard shortcuts for creating child and sibling nodes, and makes it easy to reorder and reattach the nodes. The node formatting also works well and let you flow changes down to child nodes nicely. It mostly gets out of the way which is how a ind mapping tool should work.

Ever since I had to write academic papers in LaTeX, I’ve largely stayed away from traditional word processors. I much prefer to focus on the words and work out the formatting later, which is exactly what iA Writer does. You can write plain text or Markdown files and store them in Dropbox but there’s no options or styling — just the text. I find it really helps because there’s nothing to procrastinate about or fiddle with. 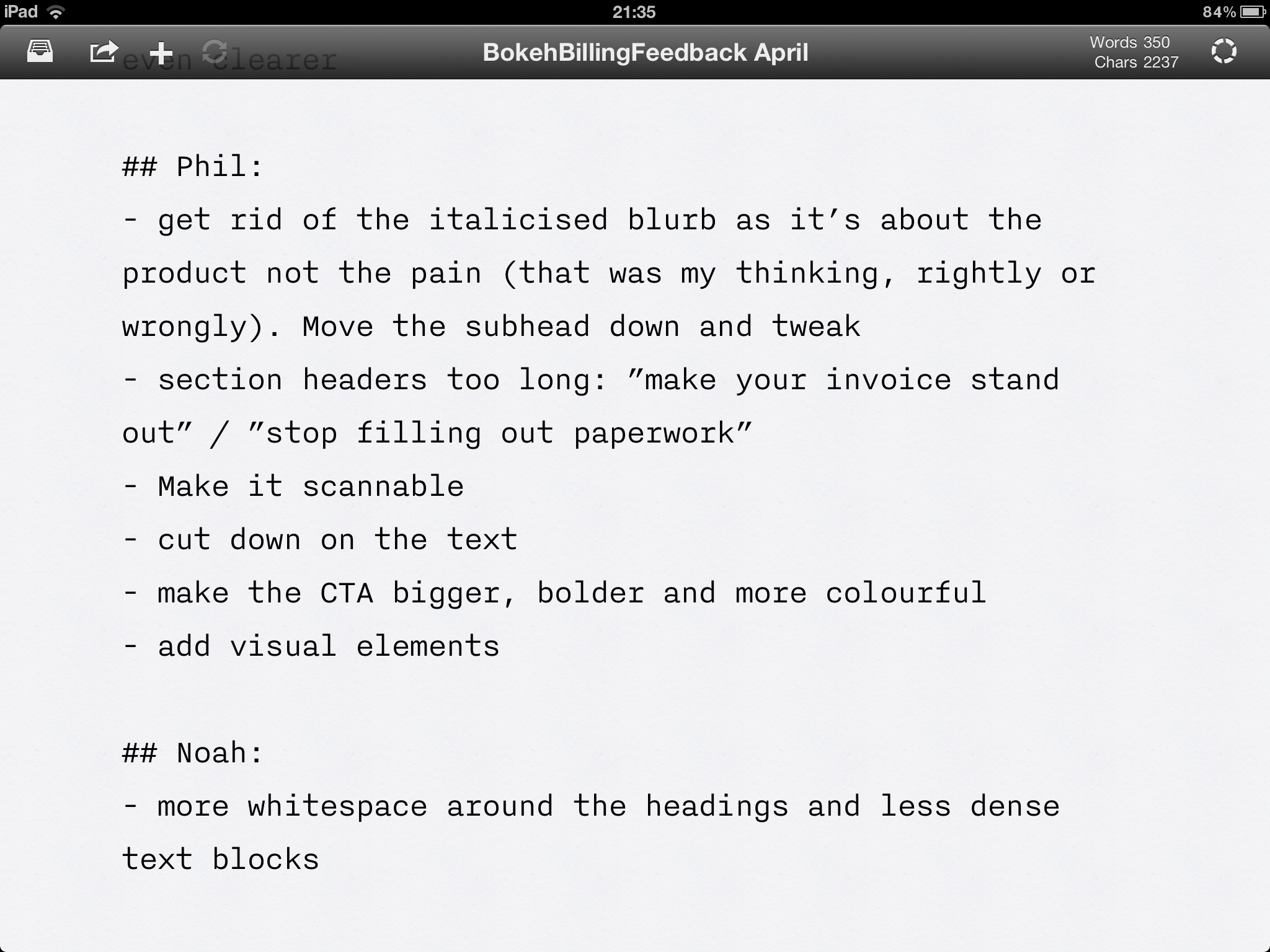