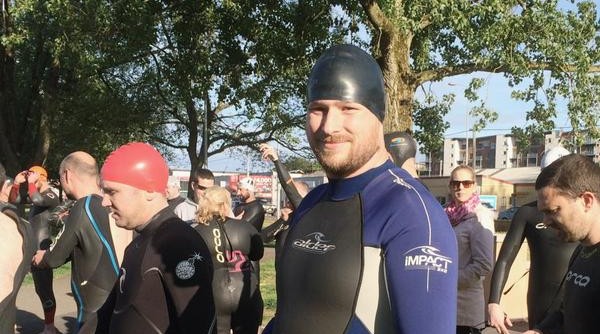 I’m about to do something really scary. Something that is scaring the crap out of me but which, in moments of logical clarity, I’m confident that I can do. This is what it’s like to have a fixed mindset.

I’m a few hours away from my first open water swim.

It’s only 1km. It’s not competitive. It’s not even a race!

I swim quite a lot compared to the average person (who doesn’t swim at all!): around 5km a week, in the local 20m pool. I do a minimum of 1km, typically 1600-2000m, in each session without rests. I’ve swum 3km without rests. I’ve swum 5-7km with rests. I’ve been consistently improving my times and distances for the past few months. I’m faster, and swim longer, than anyone else I regularly meet at my pool (admittedly, they’re mostly old ladies).

In theory, a 1km swim should be a… paddle in the park.

But I’m not naive enough to really believe that.

This swim is in the Lee River: it’s not blue, not clear, definitely not still, not 22℃, and not free of marine life. Let’s put it another way: it’s going to be heart-stoppingly cold; it’s going to be a tough swim upstream, against the current; and it’s going to be hard to see where I’m going. Perhaps my only hope is that the resident otter will rescue me.

Cycling on an exercise bike -vs- mountain biking down a trail; Swimming in a pool -vs- … pic.twitter.com/WdisOVxQc6

Swimming in the pool is to open water swimming, as cycling on a gym bike is to mountain biking down a trail. There’s a whole lot of new factors to take into account and, while I’ve done some homework, and practiced some things like ‘sighting’ in the pool, there’s really nothing else I can do… except do it.

And that has me scared.

My kids often get scared about getting back on the horse that threw them, or climbing up a high frame, or swimming in the deep end, or joining the hurling club. I, being the good dad, try encourage them. I try to teach them about the growth mindset. I tell them that failing is ok, as long as they try and learn something from it. I tell them that the only way to learn is to try, the only way to get good is to practice. We have two rules: try your best and have fun. But, while I tell them that, I don’t believe it myself. I remain in the fixed mindset.

But I need to do this to learn some lessons for the 2k Lee Swim in July. I need to understand how cold it will be, how hard it is to navigate, and what the current feels like. And, to be honest, I’d like to do more open water swimming — bouncing up and down a 20m meter pool makes me feel like our Tetras in the fish tank.

So, this is an opportunity to show them my attempt at a growth mindset. I’ve been quite open with them that I’m scared about doing this, and why. I’m not putting on a brave face. I’m not being that macho dad. I’m vulnerable, and nervous, and quite scared. And they know that.

They’re also coming to watch me swim — to watch me face those fears and hopefully conquer them.

…And, I’m back. Not scared anymore.

We got there early, walked up and down the riverbank with the kids. The sun was shining and there were some ducks furiously paddling against the current. I felt better although still pretty nervous.

It was time. I hung back, in the 1km group, and got in the water last.

Cold, pretty coooold… though not actually as cold as I expected. Slippery ramp underfoot. I got in and just started swimming. My arms and legs just did their thing but my chest was in a total panic. I was breathing only on my right side, and on every stroke. Then I remembered: other people! I started catching up to other swimmers and, in my confused state, didn’t actually realise I was passing them because from the glimpses in front of me all I could see were more swimmers to follow.

I eventually realised that I had to make a conscious effort to exhale. And keep my head in the water. And look where I was going.

Everything in the pool is very measured: I breathe every 3 strokes, alternating left and right; I exhale when my head is in the water; my pace is really calm and consistent; I hit the wall and turn, my feet pushing off within tenths of a second of the pace bleeper. It’s a really controlled experience (although, I’d never have called it that it until today’s frenzy).

In contrast, my river swimming was like putting an untied balloon in the water and letting go: unmeasured, uncontrolled, erratic, and fast running out of air.

I was definitely struggling after 3-400m at that pace, without breathing properly, and then there was the other surprise: the river wasn’t that deep! The evening sunshine highlighted weeds reaching up to me, and old tree trunks lying on the bottom. And then a cloud would pass over, or I’d swim through a shadow, and the water would go completely dark. Spooky! — which definitely didn’t help the calm breathing and pacing situation. In places it was shallow enough that my fingers scraped along the bottom and I even stopped once or twice to get my bearings.

Up until this point I’d been following any swimmer / splashy thing in front of me. I kept getting pulled right, towards the middle of the river, and then I lost them for a while. Then, ah yes! The buoy, about 100m away! That felt like the longest 100m ever because every time I looked down I saw the weeds in the same place. I was swimming in an infinity pool! Except, of course, I wasn’t because they weren’t the same weeds I saw each time. I was making progress but my pool-instinct of looking at the bottom to judge speed/progress was deceived by the almost identical weed-and-stone scenes.

Yay! Around the 500m buoy I went. Everyone else seemed to be carrying on to the 1000m buoy and I briefly considered it but wisely stuck to my plan. At this stage, I assumed any other swimmers doing the 1km were well in front of me.

It felt much better to be heading back downstream again. My stroke evened out a bit, and I started to regain a bit more control over my breathing. My long stroke isn’t well-suited to swimming against the current and it’s something I’ll work on fixing.

Eventually, I spotted another swimmer and started following them… until I realised that they were coming against me. Whoever you were: sorry for nearly ploughing into you!

I spotted the slipway. Or something that looked like it might be the slipway, or a slipway, so I started angling towards it. My stroke was feeling better now, breathing more regular — maybe 60% as good as in the pool.

I spotted my wife and kids at the slipway cheering me on, and a bunch of other people which I assumed were the swimmers who’d finished.

I get to the slipway, out of breath and pretty shaky. I’d done it! My first open water swim. No walls. No lane markings. No clear blue water. And I didn’t need to be rescued by an otter!

Paddle in the Park 2015 — swimming back downstream was definitely my favourite part :D http://t.co/YsHk8IZCA0

It wasn’t a race, and thankfully no one was keeping times. My wife tells me I was zipping past the other swimmers on the way up (powered by shear panic!) and I was the first 1km swimmer back (I think most did the full 2km though — I’ll be doing that next year!)

So, I’m pretty proud of myself now. I’ve crossed an important milestone from the pool to the open water. I’ve learnt an awful lot about what it’s like to swim outside the pool.

The cold really wasn’t that bad — certainly nothing like the freezing waters I was expecting. Sure, the wetsuit helped but I didn’t really feel that creeping cold that I’ve felt in the sea. But I did feel the effects: that panicking feeling in my chest, the tightening and the uncontrolled breathing, and the slightly stiff muscles. I need to practice more outside to get over that panic feeling and just relax, relax, relax.

The river current wasn’t quite as bad as I feared — I’d joked with my wife that I might be in there for 20mins and not leave the slipway. I’ll need to work on a punchier stroke though — my long stroke loses momentum against the current.

Navigation was hard but I’d expected that. It was easier heading downstream partly due to the reduced effort and partly because the sun wasn’t in my eyes — all things a pool baby doesn’t consider. I need to practice my sighting a lot more as it was all over the place in terms of technique and timing.

Also, you know what? The River Lee doesn’t taste that bad! I mean, I wasn’t intentionally slurping it but I got a few good tastes. It’s kinda peaty, and didn’t seem filthy at all.

So, that’s it. I’m proud to have made my first little open water swim. I’m not ecstatic, and I don’t have that glow of a huge achievement. This is stepping stone. One more lesson in the journey.

After days of fretting about the swim I’m also really glad it’s over. I can get back to doing some work now.

The next one will be a little easier with these lessons learnt, and maybe harder in new ways :)

Also, a big shoutout to all those that did the Swim for a Mile challenge this week — including my brother who swam his first mile since we both got our 1 mile badges together as kids over 26 years ago! It’s so great to hear people taking up swimming again.