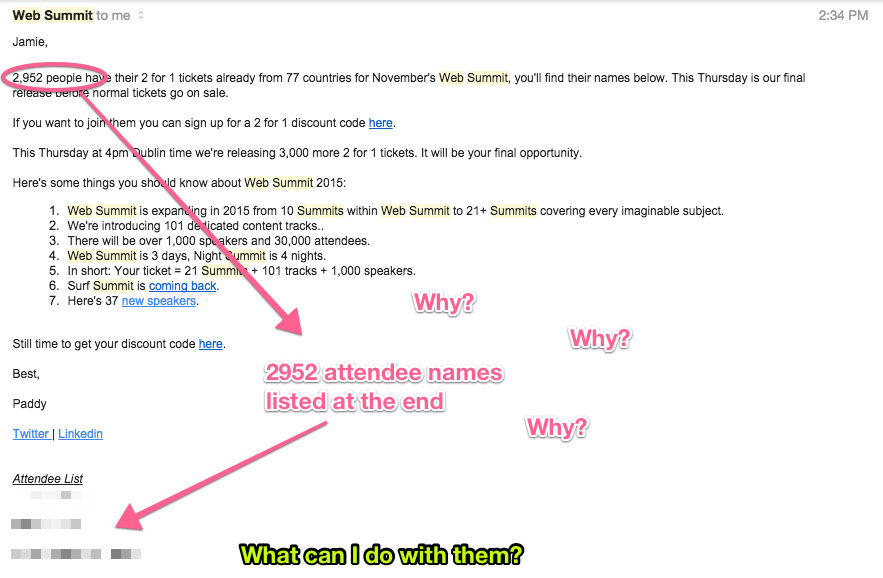 WebSummit decided that sending the names of 3000 attendees to people who still hadn’t availed of their wonderful offer would be a great idea. Personally, I found it offensive to receive the email — and my name wasn’t even on the list. I wonder how they felt? In fairness, it’s apparently made clear to attendees that their name will be used in this way but it’s pretty icky-feeling marketing.

Since I was minding my son that afternoon, I did something quick so I could get back to playing football.

I used the Gender API service to analyse the first 500 names (because I’m also too cheap to buy credits for the full 3000):

This script reads in a file of names, one per line. We split the full name and pass the first name to the gender api. We store the raw json in a file (to cache locally in case we want to reuse it) and count the resulting genders. Then we print the results. Not rocket science but as little fun.

The output from the first 500 names was:

In fairness, a 76/22 male/female split is actually pretty good in the world of tech conferences. It’s still too unbalanced but not as bad as I feared.

I’m probably not going to do anything more with the names but here’s a few other ideas: